This last week the painting was finished up in various rooms.  It was difficult to pick out colors as it is hard to imagine what they look like when the whole room is painted versus just a patch.  A couple of months ago, we hired someone to come in and put new drywall on the ceilings because there were lots of issues with the plaster.  Now, we finally get to see the end results of that new drywall with a coat of paint.  What a difference!  It also confirmed our choice in having the ceiling work done.

Also, being that we were having the walls and ceiling painted, the painter was able to spray the crown molding instead of using a brush.  The finish comes out so much better.

Entry Way
The entry way was painted with a slightly different gray color than in the living room.  I love the little crown molding return as you go up the steps.

Kitchen
When the cabinets were installed, he also installed new crown molding around the entire kitchen.  After installation, the nail holes and joints were caulked.  So that needed to be painted as well.  We were able to get some left over paint from the cabinetmaker and the painter sprayed a new coat of paint on the crown molding.  Looks great.

Dining Room
The same color was used in the dining room as the living room.  The walls in the living and dining rooms have a pretty heavy swirl texture on them that is part of the plaster.  When we first got the house, we were pretty sure we would remove this texture by putting a skim coat over the walls.  We are really glad that we didn't because now with a fresh coat of paint, the texture really adds another dimension to the rooms. 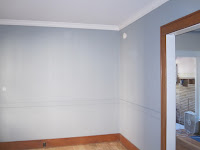 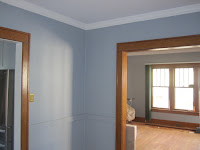 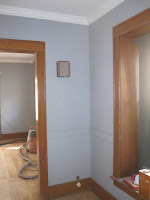 Front Porch
Being that the front porch is covered with windows, we were glad to hire this out to a painter and save lots of time taping and covering windows.  Also, since it was going to be entirely white, he was able to spray the whole room and get a great finish all around.